History of the Cavalier 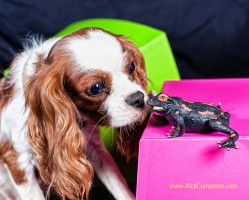 The Cavalier King Charles Spaniel is descended from the King Charles spaniel, as well as other toy Spaniels seen in many 16th century paintings. The breed started when breeders wanted to reproduce a dog that resembles those seen in these paintings. The paintings of these spaniels were seen during the time of England’s Charles II. The Spaniels that had shown these features most were sought after and their owners were offered money for the dogs. The breeders wanted to try to match the looks from the paintings as close as possible.

In the 1940’s these spaniel dogs were classified as a separate breed and were given the name “Cavalier” to differentiate them from other spaniels.

The Cavalier King Charles Spaniel is known as a small spaniel that has big round eyes. The Cavalier is a beautiful dog with a slightly wavy silky coat that comes in many colors including ruby, tan and black, Blenheim, and tri-color. The tail on the Cavalier is sometimes docked and the muzzle is conical. The breed is known to be quite stunning and is seen as very regal. 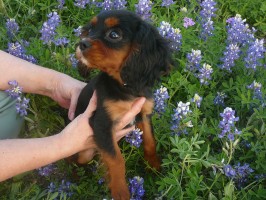 Cavaliers need to be well socialized from a very early age and need lots of attention. The Cavalier should not be left alone for hours. They come from a line of hunting dogs and therefore they love to hunt and chase. They can play for hours and be happy. They are great dogs for little children and adults alike. The Cavalier King Charles Spaniel is a perfect companion dog. It has a great sense of smell and vision and can be used in hunts in open country. This breed will also do well in competitive obedience.

Look for a puppy that:

Should I get a Male or Female Cavalier?

It’s sometimes hard to decide on a girl or boy puppy. If you are planning on your puppy being your pet, and will not be showing or breeding, then you will likely neuter or spay your puppy. If you do, the gender of the cavalier you choose should not be an issue.

There is not a big difference in male or female cavaliers. Both males and females are equally delightful, loving , gentle and devoted. Personally, my male cavaliers are always at my side, following me from room to room. They stay tuned in to my moods and how I’m feeling. The girls are nearby, many times napping on a close chair. My girls love me very much, but my boys have given me their hearts.